Casinos are one of the fastest moving industries of the world. The trait of casinos to adopt new technologies as soon as they are flourished enough to be used is one of the reasons for their excessive success. From being a place where people had to make efforts and go, to something as accessible as live casinos, casinos have covered a long journey in all these years of existence. It is this trait of casinos that brings the possibility of VR casinos to reality. 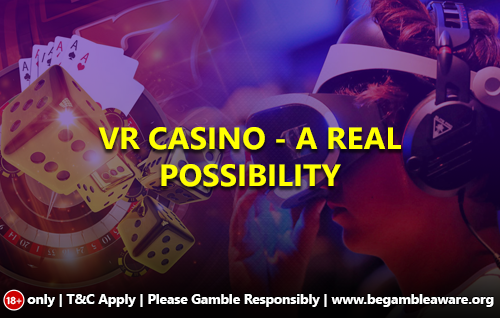 The world saw the very first online casinos in the late 90s and since then the casinos reached every house crossing the geographical, economical and linguistic barriers. Later, the introduction of live casinos brought the casinos even more close to people as now the casino games could be played online with the essence of land-based casinos as well. Now with further advancement in technology, virtual reality is turning into a real phenomenon and as history shows casinos should be the first one to adopt to it on a large scale.

Is VR casino a real possibility?

It is not long ago when virtual reality seemed like a thing of science fiction movies but with the release of VR headsets to the common people the science fiction is no more what it used to be. Soon, the world could be witnessing Virtual Reality Casinos and people enjoying their favourite casino games with their virtual friends on the table. VR headsets like HTC Vive and Oculus Rift are some of the premium VR headsets that are being called as pretty astonishing. These headsets allow the person to fully immerse into the virtual world by letting him walk and move things in the premise. This interaction gives the idea of using it in the casino world.

The doors it opens

A VR casino brings into action features like moving around and interacting with dealers or players. The games could now be played by your own choice, you could also move around and select the type of game you want to get your hands, be it the classic table games or slot machines. The possibilities go beyond the limits of an online or a live casino as you would be able to experience it all in the first-person perspective(FPP). Other than this, the VR casinos have a full environment interaction unlike the one-room bound interactions in live casinos. Physical dynamics and detailing is destined to be perfected with the evolving technology.

The future of VR casinos

Although there are VR casinos already established that have started the next move for casinos, the future of VR casinos seems like a bed of roses. With time VR headsets will become affordable and better understood, contrary to the current state of VR price and understanding for the common people. There are chances that more features will be added to the already impressive set of features. These features will attract more and more users to the table and as times have shown, new ideas develop rapidly and effectively only when the demand reaches a high altitude. Ultimately, the world will be seeing the VR gambling take giant leaps instead of baby steps.

The technology will get more refined, proving to be a great platform for the casinos to grow upon. Ultimately, the world will be seeing the VR gambling industry take giant leaps instead of the current day baby steps.