Since ages, people have loved gambling. Thanks to the traditional casino games, the new modern games have evolved from their ashes. Can you imagine a world without the internet? Neither can we! The modern gambling landscape is littered with thousands of online casino sites and betting shops. Currently, the craze of live casinos has taken over the gambling community by storm. But, where did they originate from? Let’s find out! 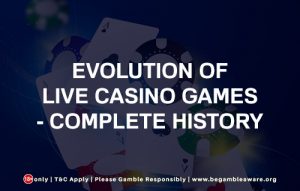 Evidence of gambling has been dated millions of years ago in the Paleolithic period. It was during this period of time that human started using tools made of stone. Other ancient evidence has been located from Mesopotamia where a 3000BC six-sided dice were excavated. In China, gambling has been popular for over 1000 years. They used to bet on fighting animals and lotto games. By the 9th century, the first games appeared. Some historians argue that the first form of gambling was introduced by Harry Ogden in 1790 when he allowed people to bet on horses. By 1845, the gambling activities were limited to racing tracks. 100 years later, betting shops were legalised which led to the proliferation of over 10000 bookie shops in the first six months.

The first form of online gambling can be attributed to Microgaming which introduced online casinos to the world. After Antigua and Barbuda passed its Free Trade and Processing act, other operators jumped into the bandwagon for the online casino gold rush. Although some critics argue about this, Microgaming claimed that their casino was the first fully functional online casino.

The next advancement came in the form of encrypted communication protocol which was developed by CryptoLogic to allow safe online activities.Intertops.com was the first modern online casino that was established in 1996. Next in line was Centrebet.com. During this period of time, a number of casinos started popping out and players started to realise the benefits of playing online.

Boss Specialtidningar AB decided to develop a system for online casino gaming in 1996. This initiative was backed up by Microgaming who started investing in new technologies. The first casino to accept real money as wagering currency was InterCasino. Cash Splash was the first progressive online jackpot slot by Microgaming which was released in 1998. The Internet Gambling Prohibition Act was launched in the same year. Also, the gaming industry amassed a sum of $834.5 million in revenue! The first Australian online casino, Lasseters was introduced in 1999. Back then, the total number of online casino was numbered at 700. By 2000, the Interactive Gambling Moratorium Act was passed in Australia which made all the unlicensed gambling operations illegal after 2000. By that time, people already got used to the online casino operations and more than 680,000 were using online methods as their prime payment methods.

To address this, casino operators introduced live casino games in 2003 which revolutionised the entire gambling industry yet again. Now, players were able to interact with real-life people in online casino games through state-of-the-art streaming technologies and HD cameras. To mimic the actual authentic feeling of a casino atmosphere, the operators started to host these games in top-notch studio rooms and regular casino rooms.